Manx Lottery Trust, through its Smaller Grants Scheme, has awarded support of £1,200 to help Rushen Silver Band in its 70th anniversary year.

The support from Manx Lottery Trust will help with a Gala Concert to celebrate the Band’s anniversary on Saturday 19th October, 7.30pm at King’s Court Theatre, King William’s College, Castletown, to coincide with a visit from the Band’s Musical Advisor and brass band luminary Richard Evans.

One of the most sought after musical directors in the brass band world, Richard has been working with the band for more than 10 years; during his visit he will work with training band, Ballafesson Brass, and the senior band for a number of rehearsals/workshops and then conduct both bands, individually and together, at the concert itself.

The history of the Band is strongly linked with the community in the south of the Island. Bringing people together from the local villages, music has been a common pastime and pleasure for all current and past members of the Band. Originally the ‘Surby Band’, the group moved towards brass instruments in the post-war era, changing their name to the ‘Surby Silver Band’; but this wasn’t to be the only name change! In 1949, the Band became aware of a fund held by Port St Mary Commissioners for the formation of a Band in the parish of Rushen.

As no more information was forthcoming, and after much discussion and soul searching, the Band changed its name and became ‘Rushen Silver Band’; many were perhaps understandably disappointed when the sum of only £19 17s 6d (approx. £1,523 today) was released!

The development of Rushen Silver Band and its achievements to date are a credit to the roots of the Band in the local community. The band room, opened in 1983, was funded and built by the Band members and friends and is a lasting tribute to members past and present. This achievement was only made possible by the generosity and support of all the Band’s Vice Presidents, the Friends of the Band, families, supporters and local residents. Success of a different kind comes with the instrumental teaching of young people, both within the Band and for beginners. This helps to give the Band the enthusiasm and drive to continue, not just to make music, but also as a social activity for the local community.

In 2019 Rushen Silver Band has been celebrating 70 years since its change of name with a number of events – including special concerts at Fleshwick Beach, Groudle Glen, Happy Valley - Port St Mary, Quarterdeck – Port Erin, and will be launching a new CD later in the year.

‘Members of the training band are taught by members of the senior band and I know everyone welcomes the additional expertise, insight and inspiration that Richard displays.’

Chairman of Manx Lottery Trust Sarah Kelly added: ‘Organisations such as Rushen Silver Band play such an important part in the fabric of the local community - not only for the players but for everyone connected to the Band - those who enjoy listening and the other local charities who it supports through events during the year. We wish the Band well in its 70th year and are pleased to be able to help celebrate the anniversary with what we’re sure will be a super Gala Concert and help support crucial musical education for the players in Ballafesson Brass and the senior band’.

Tickets for the concert are £7.50, £1 for under 18s, and are available from John Cole on 497475 and cole@manx.net. Find out more: www.rushensilverband.org.im 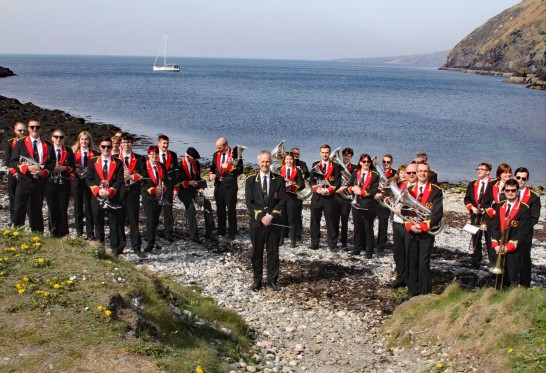 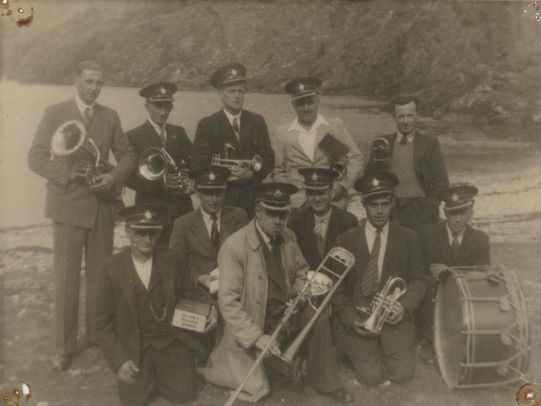 The Surby Silver Band at Fleshwick on Good Friday 1947